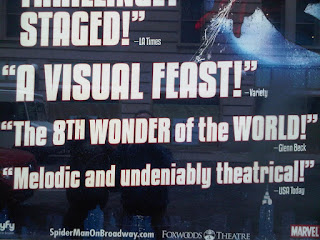 I happened to be walking behind the Foxwoods Theater last week and snapped this pic. It's sometimes hard for a show to get good pull quotes. Spider-Man needed to use Glenn Beck. That's a whole new level.

There were stage hands hanging out and an actor with a wrap-around mic coming back from a nearby deli. I wished them well. Not to their faces. I kind of blanketed the theater with good will, the way you wish someone well whose cancer is in remission and is about find out if they need more chemo.

I have mixed feelings.

Unlike most people, the $700,000 million dollars (a low ball estimate) spent on this show doesn't bother me. They're trying something new. The first 2 films have already told the story well. The third was awful. I don't understand why they didn't do previews in Vegas. Probably because that's where this will end up.

I do tip my hat to the original version for never really opening. They recognized they weren't ready. It's all semantics. But when you rake in that much money, you're open.

I'd be lying if I didn't admit how I'd love to have access to the capital and resources put into this production. But I don't work on a big scale anyway so I wouldn't know what to do with it and give most of it to charity.

I don't like that the press decided to date rape the show with reviews before it was officially open. But I feel they needed to maintain their worth. They were angry. And panicked. And wanting some of the spotlight. Bloggers were doing their job. I believe Michael Feingold is the only major one who didn't. He did end up writing a large non-review that could be summed up with “why bother?”

The revamped Spider-Man cranks up more previews tonight. They needed to get back to basics on storytelling and simple entertainment. Lipstick on a Titanic or a brand new show? Will it be up for awards? Will everyone forgive and forget? Or will it do what most commercial productions do and close before making its money?

I hope it is really good and runs a decade. It's Spider-Man after all.