I’m going to be one of the actors who takes turns at random to play one or both of the characters in this great play. Aimee has been hard at work on this so we can have a lot of fun. Please come see it, if you can.

Tickets are free but donations are gladly accepted.

The Jazz Age literary celebrities Zelda and F. Scott Fitzgerald come to life in a fast-paced and unexpected portrait as they meet, marry, and travel the world together. In this exploration, a diverse group of six actors will be prepared to embody either Zelda or F. Scott at various times, opposite a scene partner also chosen at random. This lively experiment will examine power, control and what we think we know about the original celebrity couple.

Spent two weeks in June at the Celebration Barn in South Paris, Maine studying performance and clown techniques with Avner Eisenberg, known around the world as Avner the Eccentric. That’s him in the middle of the picture! He’s known for playing the title role in the action comedy romance The Jewel of the Nile and for his wordless, solo comedy show Exceptions to Gravity.

Avner is a truly gifted performer and an incredibly giving teacher. We had sessions during the morning, afternoon and evening Tuesday through Friday, with a session on Saturday morning, that incorporated his Eccentric Principles. Performers who read them will get them intellectually. But they are very often difficult to keep going.

It’s the difference of when a real musician sits down to play an instrument. You know the moment they start that they know what they are doing and you relax around them. You are probably not aware that is what’s happening.

The kind of performance he was teaching was perhaps the most pure I’ve experienced. There was nothing to hide behind. No script or character. Frequently no words or even mime. Just being present with the people in the audience.

He gave me some bits of wisdom I hope to continue to put to use. When people were having a tough time, he would tell us that it didn’t matter what we were doing there. What was important was how we would use it in the years to come.

–Honest is what we look for, not funny. Many times the audience and the performer have the same thought in their head, which is, “I hope this doesn’t suck.” Humans crave rapport. The performer’s job is to create and maintain rapport.

–Every time you breathe, you move the rapport ten yards down the road. When you stop breathing, the audience doesn’t know what is happening.

–Clever is a way of telling your partner (or the audience) that you’re smarter than they are.

–Laughter in an interruption, not a goal. People laugh for completion.

–How do we know your body knows you have completed your task or solved your problem? When you let out an exhalation. Be sensitive to when you’re not breathing.

–Every movement tells a story.

–You do the work on stage. The audience feels it in their hearts and minds.

–The question before going on stage is “Am I going to like them?” And the answer, of course, is, “Yes!”

–There’s no failure, only feedback.

We were also treated to a performance of “Exceptions to Gravity” at the end of our first week. He is still amazing. He still falls to the ground, balances a ladder on his chin, does slight of hand tricks, and a number of gags that still feel fresh. It is rare for me to have “that’s what I want to be when I grow up” thoughts but I had them a number of times in his workshop and during his show.

Working on this production has been an absolute delight. It’s a comedy from 1961 that looks at what happens when misunderstandings go unaddressed in marriages and close relationships. The characters and dialogue are cracklin’ good and whip smart.

The costume designer Ben Philipp works on the TV show “The Marvelous Mrs. Maisel” so we got to get some great period costumes from their incredible stock at Steiner Studios by the Brooklyn Navy Yard.

The role I’m playing is a fun challenge. It’s like an 80/20 mix of Noel Coward and Harold Pinter. It’s funny but does take some twists. The people I know who are familiar with the play say it is one of their favorites.

I play a book publisher caught between his ex-wife and his fiancée. Sort of an early Jack Lemmon kind of role. I get to say things like, “Well, let’s say it’s not prose. Actually, it’s not even punctuated. I get the feeling you waited until you were out of breath and then threw in a semicolon.”

The cast is really great. Shay Gines did a top-notch job of casting this.   is perfect for the roles they are playing and are tearing it up. When you can throw something out and someone gives it back to you on stage, that’s the closest thing to nirvana I know.

I do want to come clean about how when I first read this, I didn’t think it said anything about the topsy-turvy world in which we now live. But the more we dig into it, I can see how it’s about people navigating a lot of unexpected changes in a society on the brink of big transformations. Shay said that there were only 4.4 divorces out of every 1,000 people at that time. So to see the title character be so strong and self-reliant must have been an eye opener. In many ways, the script is ahead of its time.

Got to see a cut of the short film “Disinformation” this weekend. It was written and directed by Timothy Judd. I play an intelligence agent who gets in hot water for revealing classified information. Marissa Carpio, pictured below, is the agent who comes to set me straight in it.

We shot this on a chilly Friday in November in an underpass in the northern part of Riverside Park. It was threatening to rain that day so this helped keep the equipment dry.

We only spent a few hours at the location but my face got a chill. My suit in the picture is great for warmer weather. Marissa had the good sense to wear thermals under her outfit.

I haven’t done a chilly shoot like this since 2012. I forgot how the cold can go through your shoes. On this other shoot, it started before sunrise and went way after sunset. I was having trouble making plosive sounds that day because my lips gave up as icicles formed on my mouth.

Marissa and I had a good time cracking each other up between takes at rehearsal and while waiting between takes. I won’t give away the ending because this might go to film festivals. But it doesn’t work out so well for one of us.

I had an incredible time working on Mariah MacCarthy‘s “Honors Students” at the Wild Project in the East Village over the last couple of months. I had the good fortune to work on several roles for a script that was equal parts brutal and beautiful.

All the members of the team on this project were a dream. Mariah and the director Leta Tremblay refer to one another as art wives and it was nice to be adopted by them! The rest of the cast (Thanh Ta, Olivia Levine, and Arielle Goldman) brought it every night. The design and production teams made this a top-notch and cohesive indie theater production. Special shout out to our stage manager Michelle Navis and house manager Cassy Lynch who made the show a home away from home each night.

Can you please vote for “Honors Students” for The New York Innovative Theatre Foundation Awards? Everyone working on this deserves high scores! And, I hate to ask, but it would mean a lot to me if you voted for me as Best Featured Actor. In all my dog years in NYC, I have never been a finalist–let alone a winner of an IT Award–for my work as an actor, solo performer, or playwright.

Moments from the six characters I played in “Honors Students.”

I got to play six very different kinds of roles: an absent father, an arrested development waiter, a woke(ish) professor, a Buddhist nurse, a tough scary guy (possibly mob related), and an older blind woman. Through much of it, I felt like I had one foot in clown and the other in Pinter. I very much appreciated how Leta and others let me explore choices that brought the roles to life physically. When I first got the script for the audition, I was inspired to write monologues for the two roles coming up with a backstory for both of them. The dialogue and the scenes I had always had me peeling layers to the end of the run.

One kind soul texted me, “You have a range like a MFer!” And to paraphrase our mighty playwright Mariah MacCarthy, “If you have a show that calls for one guy to play a bunch of parts in your show, get Chris Harcum.”

The deadline to vote for us for the IT Awards at http://nyitawards.com/vote/ballota.asp is this Sunday, Nov. 18. Thank you!!

From a session last summer for Kent Meister‘s We Are Stories: Faces of New York Indie Theater. Kent calls this an outtake. I call it one of the best pictures I’ve ever taken. I really don’t enjoy having my picture taken. But he is an incredible photographer who truly makes you feel like you are doing something easy and special at the same time. I love seeing all the pictures from this series and am very honored to have been part of it.

You can check out more of Kent’s work at www.kentmeisterphotography.com. 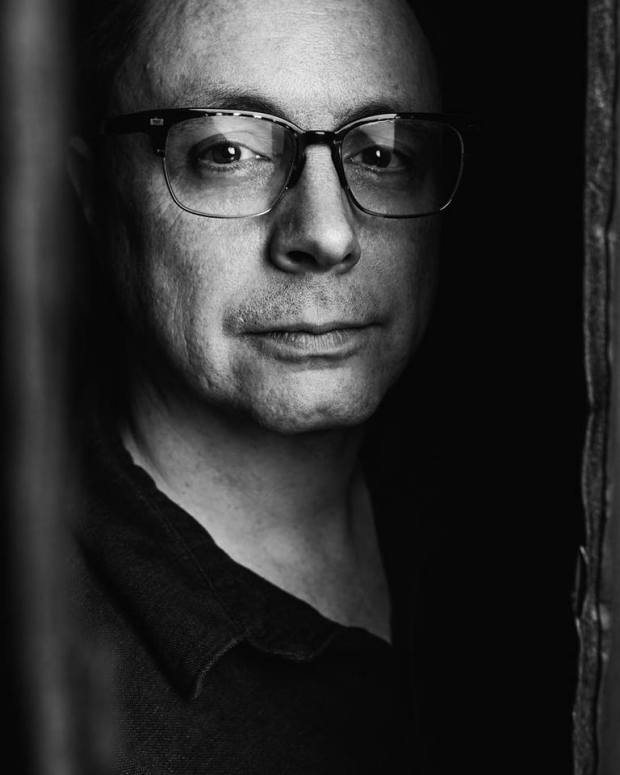 Came across this image for a solo show I made back in the summer of 2001 called “Standards.” This was my third solo piece. I created and rehearsed it in under six weeks. I was intending to do one kind of show but everything changed when I witnessed my grandmother die from cancer.

I asked my brother Ben to draw an image for it. I said I’d like a remote control fighting another remote control and there should be something American about it. I love the little details he made in it. See if you can spot Waldo and Spidey. I retitled this in 2003 to “Gotham Standards” and performed it in Canada and FringeNYC.

As weaponized divisiveness seems to be the regular room temperature setting for the country these days, this image seems even more relevant. Happy 4th of July, everyone!