What will it take for a verbose Canadian mime to become a real New Yorker? “When life sucks as much as your mental health, go to Rabbit Island.” This play was performed at the Kraine Theatre in Manhattan in 2012. 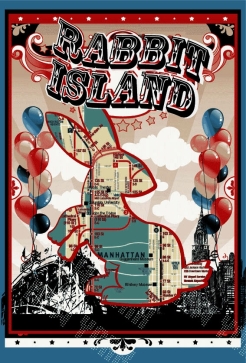 Chris Harcum’s new play, Rabbit Island, is a quirky, funny, romantic comedy about figuring out who you are and what you want; and how to survive, given that knowledge, in the big city in the 21st century. Let me immediately note that I am a big fan of Harcum’s work, and publisher of a good bit of it. He’s a smart, talented, versatile playwright, and with this new play—absolutely a departure for him—he does not let us down.

The hero of Rabbit Island is Alex, a Canadian mime living in New York City trying desperately to fit in. He faces, he thinks, all kinds of passive-aggressive discrimination, and he suffers from his “niceness.” He’s also trying to deal with his girlfriend, Karen; her life coach and his therapist seem to have very opposite ideas how their patients should approach things and that’s a big source of tension. Later, Alex meets Barbara, a burlesque artist with a passel of issues. Will Alex choose Barbara, or Karen, or neither? Will be dump his uber-arrogant shrink Dr. Bob? Will be figure out how to be a “real New Yorker”?

All of these questions are answered, quite satisfactorily, in Rabbit Island.

“This town will ass-rape your sanity till you’re an empty shell.” That’s just one of the hilariously rude barbs hurled by the crazy, dysfunctional Manhattanites in Chris Harcum’s raucous and rabid hour-long comedy “Rabbit Island,” part of the Frigid New York festival. The main character, Alex, is not really a New Yorker at all but a displaced milquetoast Canadian mime desperately trying to fit into fast and furious Gotham. In his attempts to toughen up, he bounces among macho therapist Bob and two voracious girlfriends, the corporate shark Karen and the eccentric but equally ballsy performance artist Barbara. Unbeknownst to Alex, Bob is also servicing Karen as both a life coach and a lover and eventually moves on to Barbara. As this quartet jumps in and out of bed with each other, two clowns serve as a kind of slapstick Greek chorus.

Harcum draws an insanely funny portrait of crazed urbanites, perfectly balancing exaggerated parody with honest characterization. Each is searching for the key to happiness—or at least the absence of stress—through cockamamie theories.  “Rabbit Island” is well worth a visit. The run is relatively short, so hop to it. 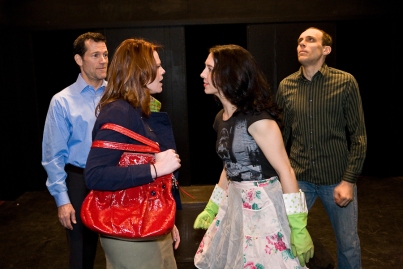 Fact: Coney Island was at one time actually an island overrun by rabbits. And in Jolly Olde England rabbits were called coneys. Hence the name. Fact: at the end of the 19th century (before Brooklyn was incorporated into New York City) Coney Island was a haven for rogues, scoundrels, and scofflaws who lived on the beach in shantytown shacks and took advantage of both recent immigrants and plentiful clams. Even then Rabbit Island was renowned for fast talkers, sharpers, and blackguards. This New York, real and idealized in the same breath, is what Chris Harcum evokes in his new play Rabbit Islandl.

Funny thing about this town – sometimes it gives you a directive. Never something easy or fun, New York has a way of crushing your dreams into a glittery powder and then telling you what you really think as it blows dream dust into your eyes. That’s when you find out what you have to do in order to become a real New Yorker.

Alex, a Canadian transplant, moved to NYC to make it as a mime. While pursuing this dream he gets involved with a couple of women, Karen and Barbara, and a therapist qua fast talker, sharper, and blackguard, Dr. Bob. At first the two ladies don’t like Alex. He is a nice guy – you can hear it in his Canadian accent. Dr. Bob likes Alex even less, ‘cause Dr. Bob is the evil Id of NYC incarnate. Bob is a wolf with a taste for rabbit flesh, and Alex is a rabbit. Bob tells Alex the only way to get over his neuroses is to grind his soul into a glittery powder and pour the ashes into the East River. So Dr. Bob gives Alex an assignment: he must bare his most private self on the street and “get it all out” – literally.

Though the production is spare, the script is tight, fast, and full of genuinely funny jokes. Ethan Angelica, Carrie Heitman, and Mel House never let the beat drop, and Joel Nagle as Dr. Bob channels the mercurial menace of New York beautifully. Director Aimee Todoroff sews the whole thing together into a seamless hour of hilarity. As the lights go down for the last time, Alex earns his ears and fulfills Dr. Bob’s directive. Best of all, he’s found someone to share the moment. Because nothing makes you more of a success in The Big Apple than holding hands with a loved one as you squeeze out the rest of your soul onto the sidewalk.

Obviously playwright Chris Harcum goes right for the tough questions in his play, Rabbit Island… When we first meet Alex (Ethan Angelica) he is nervously pinging around his therapist’s office, a desperate Canadian transplant who simply wants to  feel like he belongs in this town.  “Some say it’s when you have your first private moment in public …” he goes on to explain, but I would offer that simply unleashing this tirade of neuroses to a therapist qualifies him for at least one click on his “True New Yorker” Punch-card.

After all, isn’t every New Yorker seeing a therapist?  Well, apparently not. “Therapy is for suckers!” declares Karen (Carrie Heitman), Alex’s straight-forward, fast-talking, fast-moving girlfriend.  Rabbit Island is first and foremost a comedy … there is no way to mistake this as you file into the theatre and are greeted by the pre-show performers (Phineas T. Haricot and Mariko Iwasa) who have either hailed you warmly as they directed you to your seat, or (if you’re a little late) have already taken the stage and are performing a physical comedy routine that is almost too beautifully executed to be called clowning, but is too funny to be anything else.

That’s an important reminder, for there are moments when Rabbit Island tackles weighty issues.  Director Aimee Todoroff understands this; by continually framing each scene with the purest of human emotions she allows elements of humor to reach a level of absurdity that never topples over into senseless  foolishness.

The cast of four is powerful; each embodying complex characters and finding the dualities so that the audience is able to both identify with them as well as inwardly breathe a sigh of relief at how different we are (one would hope).  Rabbit Island … a play that has as many twists, spins, highs and lows as any ride you’ll find at the amusement park.  And as you’re deposited safely on the ground later, you’ll understand why, in this town, no man is an island.