Chris co-adapted a modern version of The Imaginary Invalid by Moliere. In the spirit of the original, Chris also played the title role in the performance at The Cell in Manhattan in 2009.

My New York Theatre Experience: 2009. The performances I will remember for a long time include: Jane Fonda in 33 Variations, James Spader and David Alan Grier in Race, Mercedes Ruehl in The American Plan, Geoffrey Rush in Exit the King, and Chris Harcum and Kyle Haggerty in The Hypochondriac.  -Martin Denton, NYTheatre 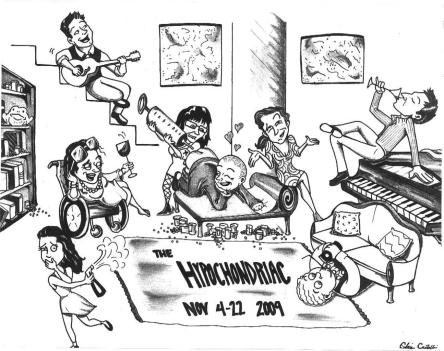 Forgive the gush of hyperbole, but I believe that The Hypochondriac may very well be the funniest play in New York right now. You may as well check it out, to see for yourself whether I’m right. This is the latest incarnation of a contemporary re-imagining of Moliere’s 1673 farce Le Malade Imaginaire undertaken by director Matthew AJ Gregory and three collaborators, Shira Gregory (his wife), Chris Harcum, and Greg Tito. (Their work, which respects the original’s framework but brings the piece thoroughly up to date, is based on a 19th century prose translation by Charles Heron Wall.) I saw this team’s last version, then called The Imaginary Invalid, back in July. Gregory and his colleagues have used the intervening months well to tighten, focus, re-tool and recast the play, and the result is splendid. And hilarious…

The Hypochondriac is about Mr. Argan, a seemingly fit and clearly well-to-do middle-aged man who has decided that he is very, very ill. He allows his medical team, led by a formidable quack named Dr. Purgon, to keep him on a constant regimen of pills, tests, and enemas: he’s addicted not so much to particular medications as to the idea of being medicated. He is, in short, a very foolish man, and in the person of co-adaptor Chris Harcum, he is a deliciously funny one to spend time with. Harcum brings a deep empathy for this fellow’s problems and a clown’s broad and fearless physicality. Watch him will himself into having a seizure, or suddenly feel an onset of avian flu, or, best of all, slide down a full flight of stairs after a scuffle with members of his household. This is a brilliant comic performance…

The Hypochondriac, offered at indie theater prices in a delightful intimate setting at the Cell in Chelsea, is as grand and glorious a farce as I’ve ever seen. It deserves the exposure that a long run on Broadway would give it, and maybe some insightful producer will check it out and make that happen. ‘Til then, it’s a highlight of the indie fall season. If you’re in the mood to laugh a lot, this may be the best medicine to take. 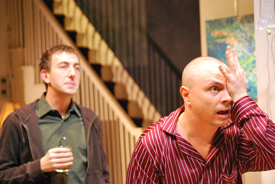 The real joy of the show was witnessing a kind of comedic brilliance that we don’t see frequently in modern shows. Maybe I’m nerd because I think Moliere is hilarious, but this cast brought the work to life with the perfect blend of vaudevillian slapstick, tight delivery and genuine acting chops. Moliere’s characters are stereotypes, but in The Hypochondriac, they become real in a way that is simultaneously comfortingly familiar and piercingly refreshing. In short: I LOVED LOVED LOVED this show for its ability to entertain, offer social commentary, and remind me of how essential classical theatre is… Harcum is impetuous and determined as Argan, rising to the tremendous challenge of playing the ass and victim in a troupe full of willful characters. 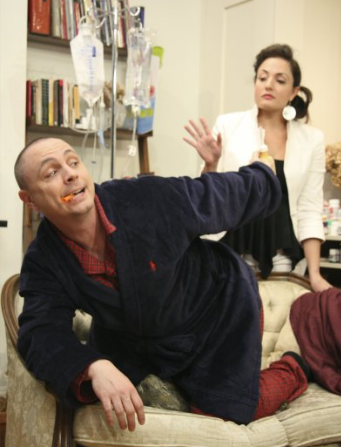 As the childish Argan, Harcum has the hard task of remaining interesting, blathering on as he does about enemas; yet he does, using the double-take on himself, whenever he realizes, mid-rant, that he’s supposed to be sick. (In his best moment, after tumbling down a flight of stairs, he continues to rage for a minute before suddenly realizing he’s fallen.)