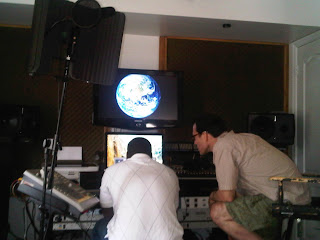 Spent most of Sunday with Cyrus, above left, and Joel, the writer and director of a short film titled Patriot at Bergen Beach Studios (Cyrus's living room) overdubbing where sound issues are bad. It isn't easy. You can match the rhythm and pitch of the line, if you're lucky. It's getting the vocal performance to match and synching the overall timing that's a bear.

After a couple of hours of not being able to get 5 measly lines spot on, despair began went through me in waves. If I knew when we shot I'd be in that mess later, I would have performed differently. Maybe I'd've scratched my nose before saying each line. Also, I thought I must have a voice in bad need of an overhaul if I couldn't get it to sound present to a wireless mic pinned to my jacket. There was a lot of wind and, because we were at a market in Chinatown, there was a lot of loud chatter in Chinese off screen.

Turns out the mic I had was bad. Joel had as many problems in the next scene when we switched. I'm curious how the film will be once it's done. It looks pretty good. We shot at some cool locations you can only get in the city. It hinges on me through most of it and I only was privy to part of what the bigger film will be. Hopefully, I'll be interesting enough to make people want to know what happens next.

I don't have as much experience as I'd like on film. Seeing yourself is always a shock. There's one moment shot from over my right shoulder and I look a lot like I've suddenly turned into my dad. Growing up, people would comment all the time how much I didn't resemble him.

Cyrus added, “yeah” as if the truth of all truths had been spoken.

Silence. I see now why on-camera talent starve themselves and get plastic surgery. It's consistent protection. But I guess weird and watchable isn't such a bad thing to be.

This was also an exercise in confronting one of my defense mechanism. I have a type of perfectionism that's a blend of striving for excellence (good) and ripping myself apart before anyone can get to it (bad). The latter is part survival mechanism and part need to please.

The one really unexpected thing is that the extremely cold temperatures while shooting do not translate. It looks like spring. So while we were in real pain, it looks picture perfect. This was the main issue with the shoot and you'd never know it. On the plus side, there were less people out in that bad weather.

I've always wanted a career in independent film. Something that is nearly impossible to achieve or sustain. If nothing else, it was nice to be a tourist in this area. I hope to learn the language a little better and visit again soon.