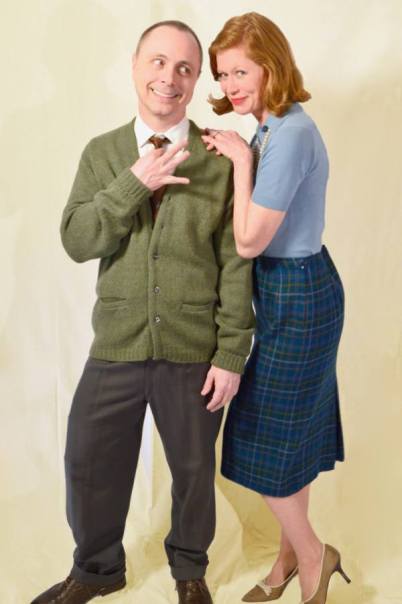 Working on this production has been an absolute delight. It’s a comedy from 1961 that looks at what happens when misunderstandings go unaddressed in marriages and close relationships. The characters and dialogue are cracklin’ good and whip smart.

The costume designer Ben Philipp works on the TV show “The Marvelous Mrs. Maisel” so we got to get some great period costumes from their incredible stock at Steiner Studios by the Brooklyn Navy Yard.

The role I’m playing is a fun challenge. It’s like an 80/20 mix of Noel Coward and Harold Pinter. It’s funny but does take some twists. The people I know who are familiar with the play say it is one of their favorites.

I play a book publisher caught between his ex-wife and his fiancée. Sort of an early Jack Lemmon kind of role. I get to say things like, “Well, let’s say it’s not prose. Actually, it’s not even punctuated. I get the feeling you waited until you were out of breath and then threw in a semicolon.”

The cast is really great. Shay Gines did a top-notch job of casting this.   is perfect for the roles they are playing and are tearing it up. When you can throw something out and someone gives it back to you on stage, that’s the closest thing to nirvana I know.

I do want to come clean about how when I first read this, I didn’t think it said anything about the topsy-turvy world in which we now live. But the more we dig into it, I can see how it’s about people navigating a lot of unexpected changes in a society on the brink of big transformations. Shay said that there were only 4.4 divorces out of every 1,000 people at that time. So to see the title character be so strong and self-reliant must have been an eye opener. In many ways, the script is ahead of its time.